Yeah so this was supposed to be posted yesterday because I had a plan but then instead I went to the reservoir with my nephews and nieces and spent the whole time trying to make sure the baby didn’t eat sand.

Mission failed, by the way. 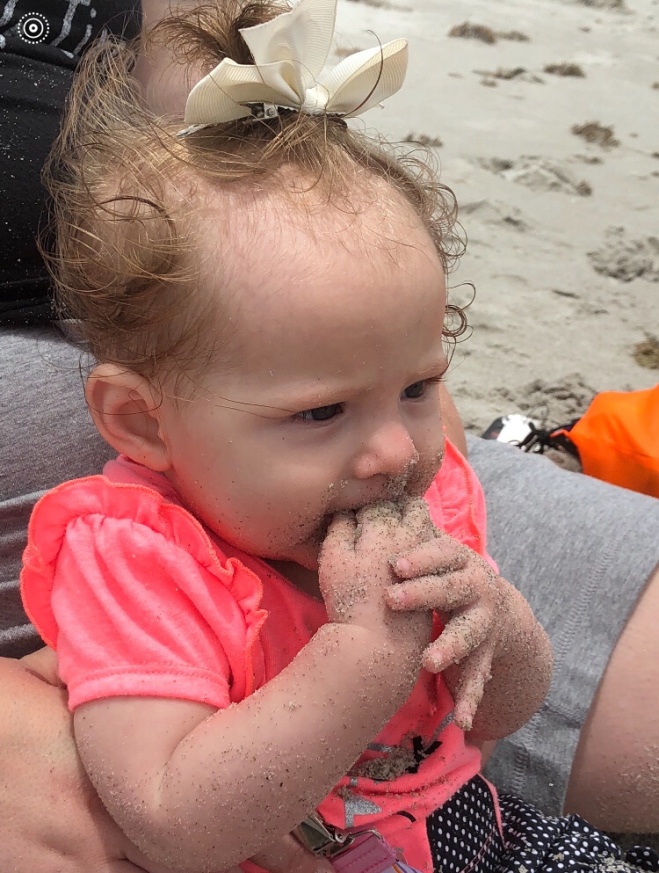 Truthfully, the other night I was eating a brownie in bed and it broke apart and the main piece fell into the sound hole of my guitar, so that’s kind of your basic picture of a post grad Tyffani in her true form.

But for real, I’ve been a little embarrassed about my life because the plans I made kind of fell through after I boasted of them and I didn’t wanna be like “jk dudes I’m a failure,” so I just waited until I wasn’t anymore. Which still hasn’t happened. But I’m fine with it now.

So how are my gigs going? If I had two more ounces of motivation, I would say gREAT. But I don’t have those two ounces, so it’s kind of like… alright. Let’s review piece by piece, shall we?

The gig about resume writing? I did a test resume and apparently that one sucked and the guy said I could try again and then never contacted me again so…radical, dude.

The VIPkid? Well I did like 6 interviews and then they were like “rofl we don’t want you” and I was upset and then I was relieved because they were pretty uppity? Like they care about too much that doesn’t matter? So I applied other places and got hired at this other platform but I turned them down because they seemed a little too uppity as well. So now I’m just waiting to be contacted by a company that ~deserves~ me. (Or a company that lets me slack, idk)

Uhh… Door Dash. So I honestly thought this was going to have interesting stories attached to it but it’s really just me, in my car, screaming. Sometimes there’s food in the seat next to me. I guess one time I did a Wal-Mart delivery to a blind man and that was an experience because I couldn’t enter his house… so I just had to like hand him his giant order at the door step…sliding the bag handles up his arm. Pretty weird. It pays pretty dang well at peak time, though. That’s a real deal.

Tutoring is where I get most of my work. I have three students (I guess two now because I just finished up with one) and I teach reading and math to elementary and middle schoolers. It’s actually really fun? Except one kid lives out in the middle of freakin nowhere and I take this insane dirt road that ate through my brand new tire this week so I’m a little bitter. Some nice truckers stopped to help me replace the tire with a spare and it was nice but I could have done it on my own because I am strong and independent (just so you know). 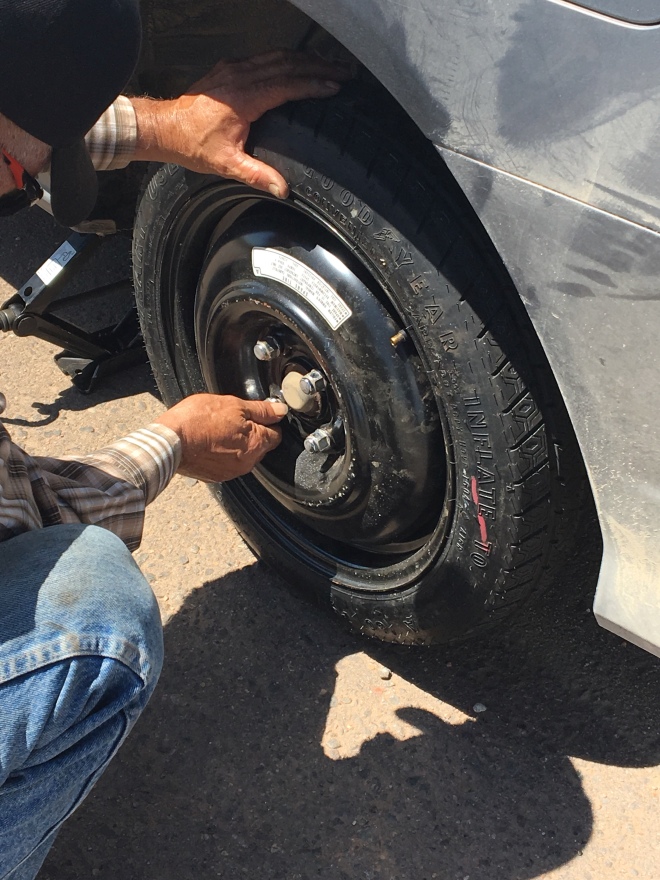 Remember the ukulele teacher thing? Well I’m on their sub list, so they’ll call me to sub sometimes for music lessons (guitar, uke, voice, piano) and I really enjoy it, but sometimes they give me things idk how to teach. Like piano? I can hardly play it? But I have learned how to fake it like a pro because the lessons are 30 minutes long and I am way better than the 10 year olds they throw at me. However, this week they gave me two voice students, and voice lessons are an hour long, and I was in choir for a long time but idk how to teach voice???????? My mind went completely blank and I had to search vocal warm ups on YouTube. Then I basically just sat there while they did a concert for me? Because all I know to comment on is breath support? Yikes so I need to learn more about the voice for next time.

If I had anything else going, you can assume it didn’t work out. Um. Yeah.

Taylor Swift Reputation Stadium Tour. All the awards. Including the one where I killed my feet because I wore heels and stood the whole time. Then I made a fan account on Twitter because I’m trash and now all I ever talk about is Taylor Swift and I am an embarrassment. Luckily I only ever talk to my family these days bc anyone else would be annoyed.

Twitter is also the place I document my every breath so it’s fun. If you wanna follow, check me at the following link. My @ is pretty self-explanatory.

Select threads revolve around my dating life, actually, which let me tell you has been really pathetic and underwhelming. I actually thought I’d get a dating profile on an app and since Mutual (the Mormon one) is a joke in areas outside of Utah/Idaho, I went with Bumble because, uh, I don’t know it sounded a lot less sketchy than Tinder. So anyway, it’s like really fun and all until you actually end up talking to the other person and the conversation is like “how r u” “good how r u” “good” “oh good lol” and you realize you’d rather die alone than ever have to answer that question again.

Bumble is also unique because the girl always has to (gets to?) be the one to message first. So I ran out of good openers pretty quickly so I started just sending memes. Honestly, I would be thrilled to get a meme, but many of them did not seem to enjoy. So I had to change my bio to “if you wanna be my lover, you gotta get with my memes.” But then you get the dudes who don’t read the bios??? U n m a t c h. 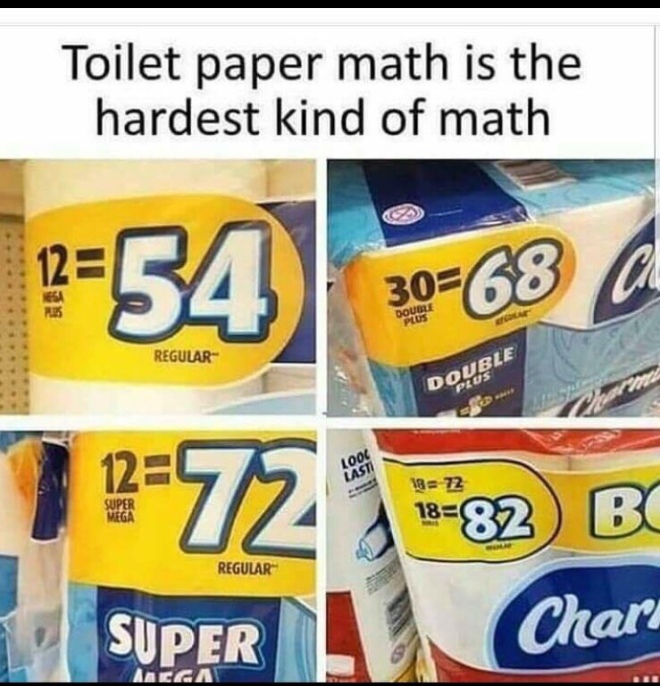 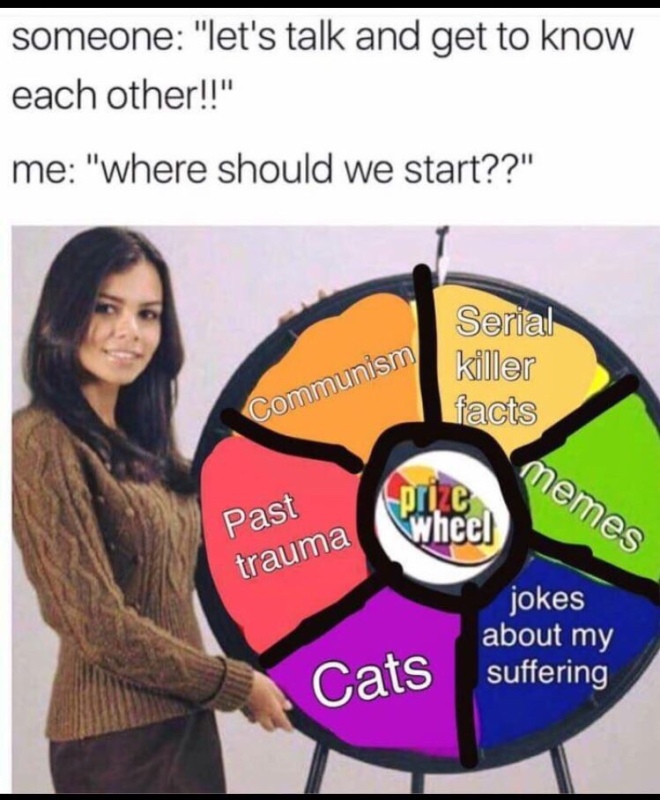 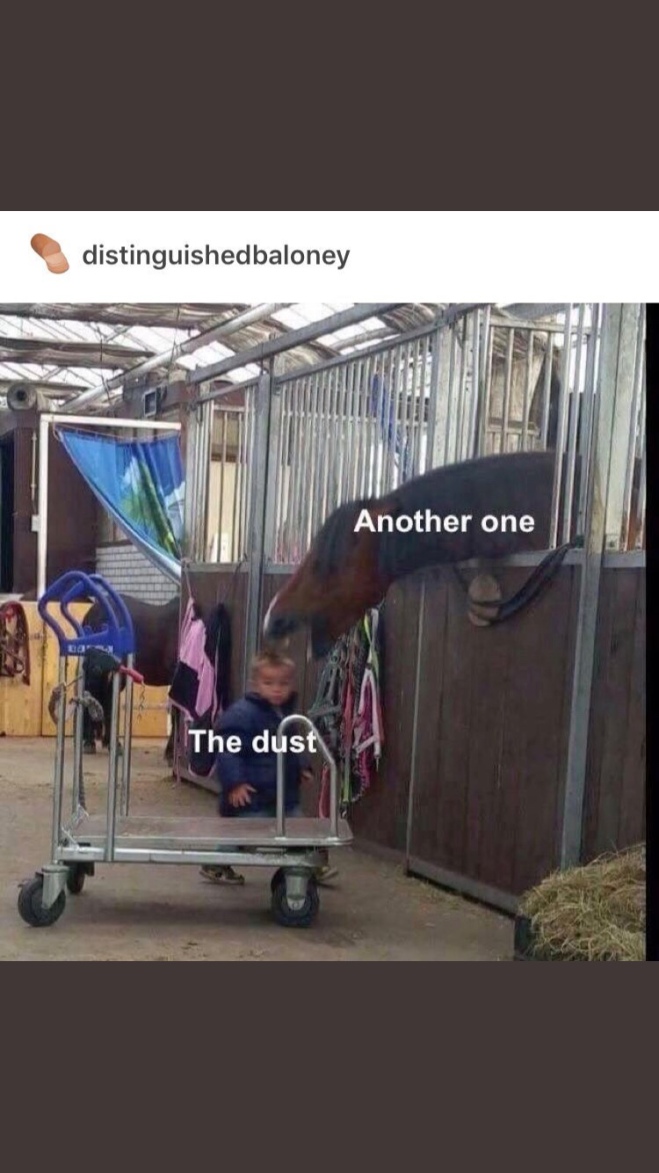 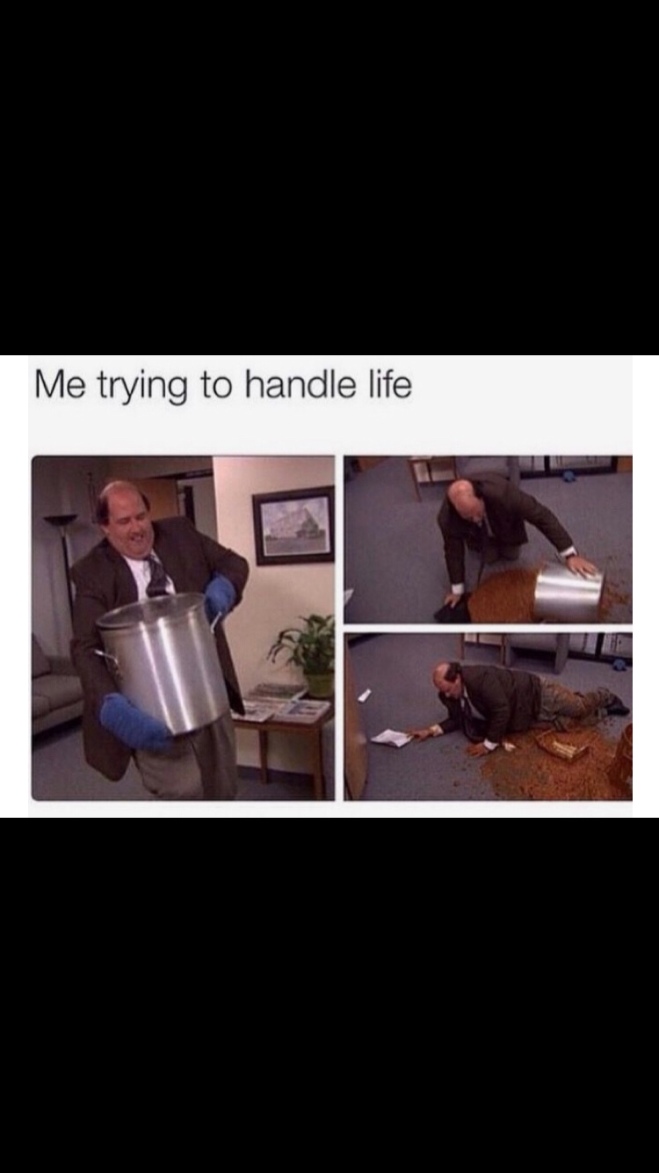 (Fun fact that meme with the options on convo topics prompted a really cool convo on serial killer facts but then I didn’t know where to go from there so I just let it die.)

I’ve always been super against dating apps because I believe they are full of shallow people/ they make people shallow, and I’m not really interested in that. Now that I’ve participated in the online dating game, I gotta say my opinion hasn’t really changed. For example, in real life, a guy is a dog person, and I’m like–I can live with that. Online, they put on their profile that dogs are better than cats? Hard swipe left. A guy quotes The Office in real life? Ok, whatever. On his dating profile? Must be a tool. 🤷‍♀️ I don’t make the rules. But winners look like this:

I don’t understand how it works for some people, it was fun for like 3 days and then it seemed like a chore. But I had to keep it up because my, like, 3 twitter followers were invested in my bumbleboy swiping saga and I couldn’t let them down.

Oh and then I actually did get asked out in real life at the gym one night (because I’ve never looked better than after I sweat for an hour) and that was… well to be honest, I could have lived without that encounter. But you can read all about that on Twitter, too.

Ok and so yeah I think you’re all caught up. I was giving a rundown of my life to an old friend last week and said something like “you know sometimes I have those days where I wake up at noon and need a nap at 3” and she was like “no you don’t sleep that much??” And wow was I embarrassed by my existence at that moment. So I had to be like “lol Sharon, of course, I would never” *yikes* 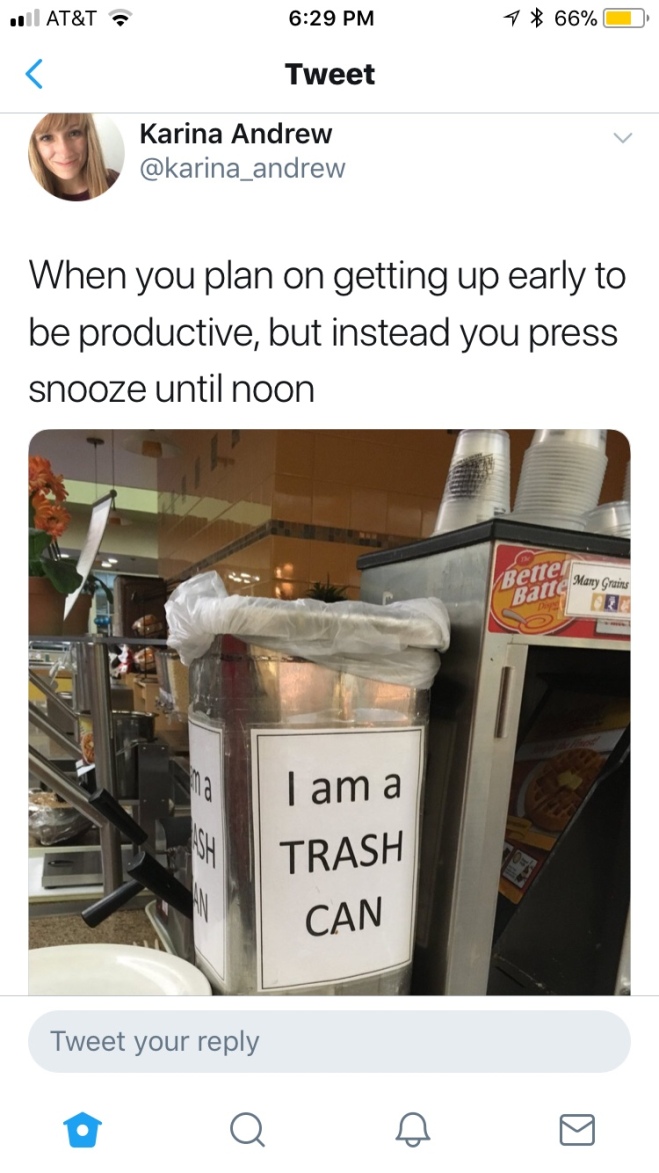 So anyway, she told me I was going to eventually have to grow up and be an adult but let me just say something here: everybody’s adulthood journey looks different. Some people work full time, 9-5. Some people work nights. Some people get married and become parents. And some people sit on their bed at 3am eating cosmic brownies, accidentally dropping a chunk into their guitar’s sound holes. And none of those journeys are invalid. Thanks.