In case you didn’t know, China thinks that BJ means Beijing, which is why the I ❤ BJ shirts probably seemed like a good idea to the Chinese marketing team but uh… I have decided to cancel Chinese tourist shirts until further notice. 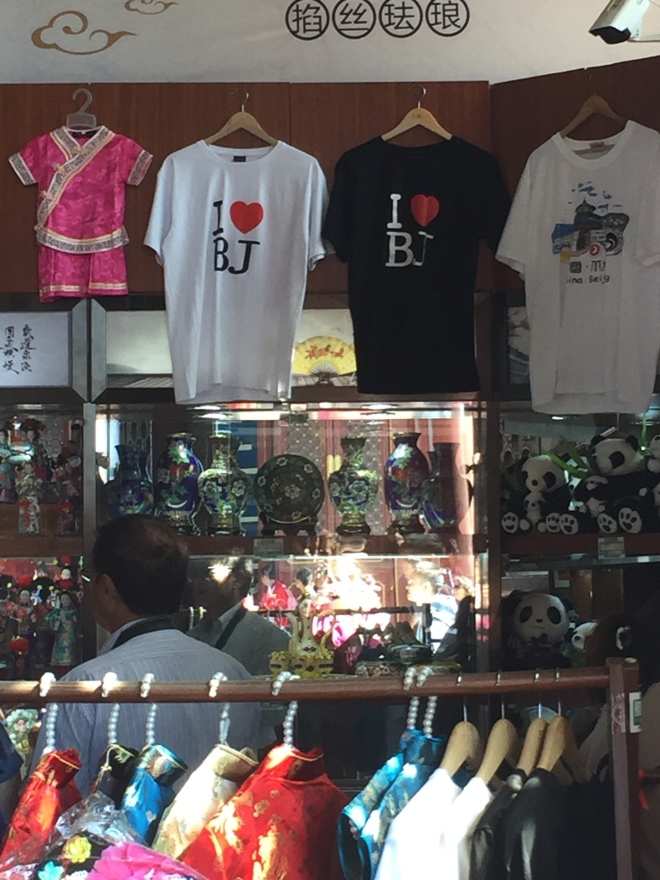 We went to the Temple of Heaven because apparently it’s a Beijing “must-see.” It was cool and it was rather cheap, but it was just another pretty building to get pictures in front of and then I was done. However, when you’re with a bunch of young American women, you have to take at least 17 pictures of each of them in front of each cool thing. So we were there a while.

Material Girl in a China World

I try to adopt the financial motto of “spend your money on experiences, not things,” but that was before I went to the Pearl Market. Now I am Tom Haverford from Parks and Recreation.

The ladies there are super smooth and you can bargain them so low. Before I went, I knew that it was a bargaining market, but I thought it would be handmaid souvenirs at tent covered markets along a street. Not so. It looks like a fancy mall and there are just a bunch of professional-looking kiosks without price tags and when you ask “how much?” they say “for a normal person?” *type a number in the calculator* “but for you?” *type a lower number in the calculator* “because you are friend.”

So now I have a lot of friends in Beijing whose names I don’t know but who gave me really good prices because I “am friend.” Having the stuff is really cool (also I had to invest in an extra suitcase in Shanghai to fit all my extra stuff, word up) but bargaining was the best part of it all. When would I have ever wanted a Gucci bag? Never. And I actually didn’t buy it for me, but bargaining it down to $30 was really fun. And maybe it’s not real, but 1) who’s going to inspect it? and 2) she did take a lighter to it and burn it, which will be useful for all the…fires… it spends time in…

We went to an acrobat show and there wasn’t any second of it that was unimpressive. We even got last minute seats in the front row. Ok, it was the second row, but nobody was in the front row, so basically…

I honestly wonder how people can do stuff like that (ride a bike while someone sits on their head) but some people lead amazing lives. Some of the participants hit us up after the show to sell us a dvd and you bet ya girl bought one so if you wanna see some sick chinese tricks, HMU for a movie night. I’ll bring chinese milk candies or somethin crazy.

Our vacation was also China’s vacation. It was the national holiday, which is like the Fourth of July but for an entire week where all of China copied our game plan, so the streets and buses were packed for like a mile outside the forbidden city in every direction. I bought a flag and a sticker and was real patriotic. You could’ve mistaken me for a national if I wasn’t like… three times the size of a normal Chinese person and white.

I got some pictures, looked for the chain of dragon people like in Mulan (there wasn’t one, pretty lame) and then got bored, but you know who didn’t get bored? All the Chinese people wanting to get pictures with US. We should have been charging money per picture, I am on so many Chinese camera rolls now. 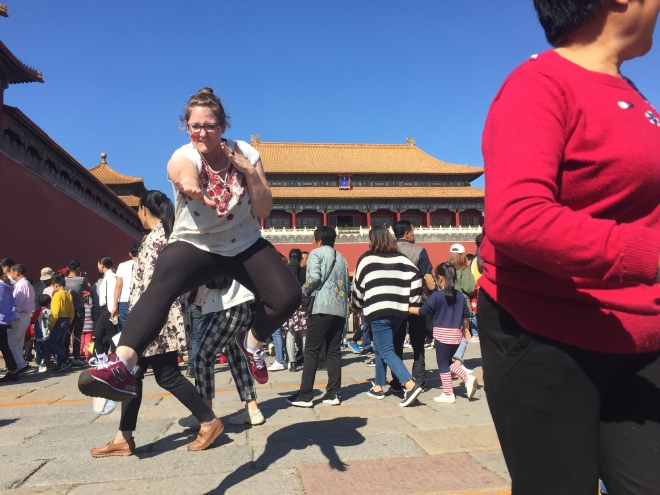 Then we went back to the Pearl Market. To see all my friends again.

Also they had a food court with a restaurant that was BASICALLY a Panda Express but with like… actual Chinese food and no cream cheese wantons 😦 No orange chicken, but the Sweet and Sour chicken was pretty orange so I took it.

When I was deciding whether or not I wanted to come to China, I considered squatter toilets for four months and said that the Great Wall better be the Greatest Freakin Wall I’ve Ever Seen for it all to be worth it. It delivered. That truly is a Great Wall.

Also we have western style toilets in quite a few places so I truly get the best of both worlds.

We hiked parts of the restored and unrestored wall and I think I died several times. People run marathons on that wall. Those people are insane and way more ambitious than I could ever be. I couldn’t even climb it without stopping for multiple breathing breaks. I knew there were stairs on the Great Wall, but I thought it was mostly flat walking and then an occasional 5-10 stairs. Wrong. I mean, the Great Wall is several thousands of miles long, but it’s through the mountains, and where there aren’t giant, awful stairs, there is just a super flat, steep grade. 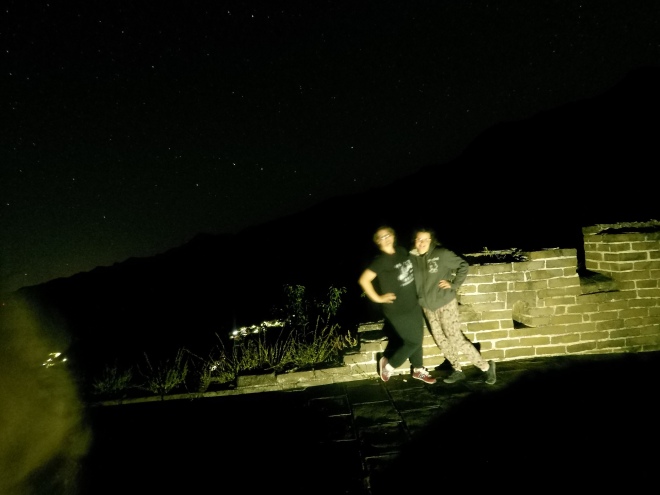 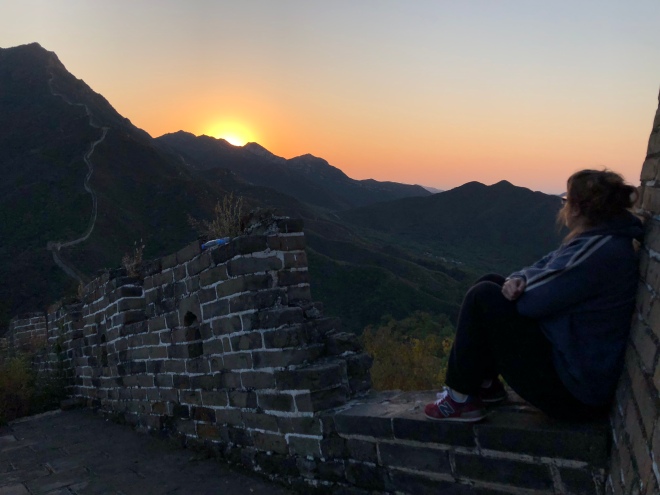 Rachel got us matching shirts that say I Climbed The Great Wall so basically I wear it every day. It’s in Chinese and English so everyone knows.

Our tour guide was an Italian chef named Umberto. Who better could show you the best of China? Also did you know the Great Wall was originally built in the border of China and Mongolia to keep out the mongols? And then they ended up conquering China despite the wall? I feel like a certain president with Wall fetishes might like a history lesson on a country he claims to love, idk. 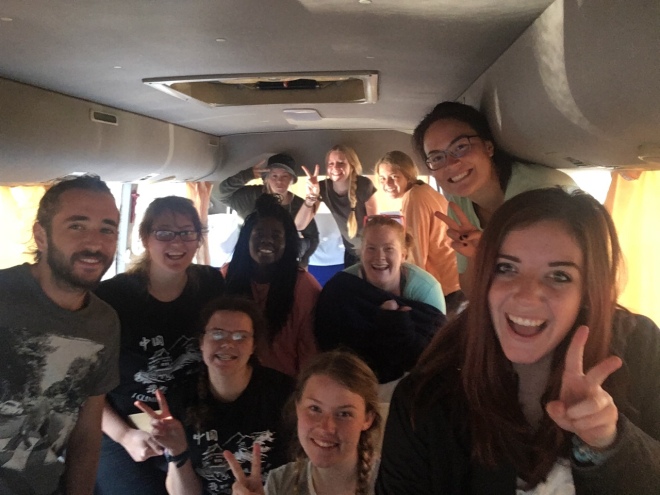 Our last day in Beijing, we had this great idea to check our bags at the train station and go do some exploring before our train left at 9 pm. Woulda been a great idea if, yknow, everyone else in China didn’t have the same idea. All the baggage check places were full so we took our stuff to McDonald’s and hung out there instead. Because there’s no place the American’s would rather spend their vacation time than at McDonald’s.

Eventually we found a different luggage check operation and slipped off to the Silk Market (another bargaining market) where I made some more friends. on the way out, there were these people selling knock off designer wallets and silk for suuuuper cheap. No idea where they found that stuff. But let me tell you: there is a hierarchy of knock offs. The Prada knock-off wallet I got? Super nice. Can hardly tell it’s fake. (actually, I can’t tell at all that it’s fake at all. I just know that they probably wouldn’t have given it for so cheap if it was real). The Louis Vuitton one I bought from the sketch dudes outside the market? So fake I can’t even handle it. Pretty sure it would melt if you took a lighter to it. The zipper alone raises all the suspicion. But it’s checkered and cute and I’m cool with it. The silk, however…. let’s just say it’s good they sold it while it was still in the plastic.

So after Beijing took all my money, we went to pop some more tags in Shanghai. and we got a sleeper train to get there. And those are the best kinds of trains. But I woke up at 6 am scared to death we missed our stop (which wasn’t until 9) and that really ruined the slumber party.