Ok so long vacations, in theory, rock. You plan on doing everything you’ve ever dreamed of, and then you go, and you have fun, and you spend a lot of money, and then you near the end broke and exhausted. So that feeling hit the group about the same time that we hit Shanghai.

We hit the hostel and then the plaza nearest to us to find some food. We found a little bakery called Paris Baguette and there was one baguette in the entire bakery, so we know now why it isn’t Paris Baguettes. But it was a really good baguette and I might live my entire life in pursuit of another one.

Shanghai has such a western vibe to it and did not remind me of anywhere else that I’d seen in China. Definitely a more progressive city without the historical aspects that the others had. Someone told us that if you want to see 10,000 years of history, it’s in Xi’an, if you want 1000 years, it’s in Beijing, if you want 100 years, it’s in Shanghai. I can see and agree with those (in my very, very, limited knowledge and opinion.)

The first day, we went to the Science and Technology Market (to make some more friends, obviously.) It was actually super cool because I asked my dad if he wanted a knock-off Rolex, and he sent me a picture of what he wanted, and so I found people who sold Rolexes and found the exact one from the picture and haggled it down to $30 in no time. These places are magical.

So many previous volunteers had said that the Science and Technology Market of Shanghai is better than the Pearl Market, but our group definitely loved the Pearl Market more. The people there were so much more fun to haggle with. People in Shanghai let us walk away without calling after us. Very unfortunate.

Also, in China, in various places, there will be people who just sit outside with a hot pot of sticky liquid sugar, and they make Chinese zodiac symbols out of it. I got a rooster, which is my Chinese zodiac, Rachel got a bunny, which is hers, and Chelsea got a dragon, because she wanted to see him make one. 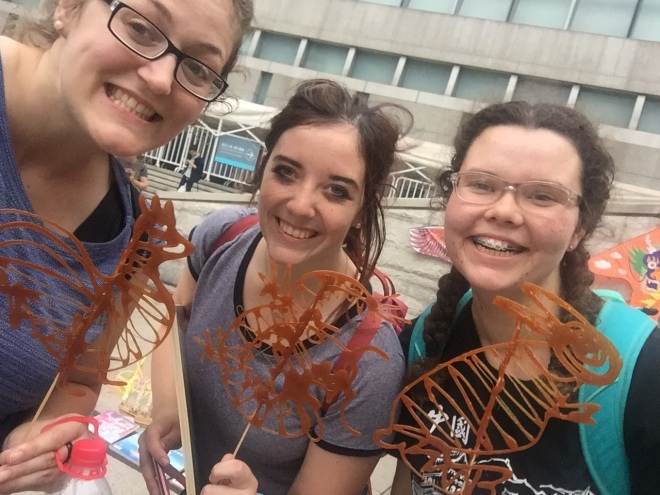 That night, we went to Nanjing Road, another bargaining marketplace. You were probably thinking I was done spending money, but I was not. I was on a quest for a rolling suitcase to accommodate all my stuff (the bag I brought was so full and heavy, it was giving me bruises on my shoulders). A man must have sensed my need, because he found us and took us to this place down this back alleyway and though he said he’d never come down to my price, he did. And the lady who was selling with him was not happy. But I – got – wheels, baby. 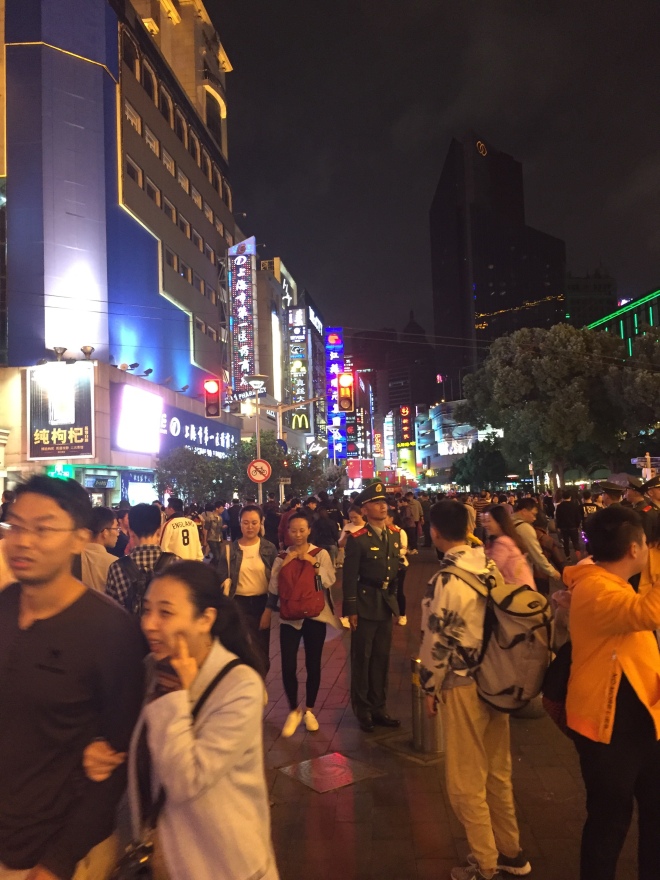 Nanjing Road ended at the Bund. The Bund is the Shanghai skyline. I was not prepared for all the beautiful buildings along that skyline. They were so tall and they had light up images on them. Some of them had the Chinese flag, it was super cool.

The next day, Chelsea, Rachel, Haley and I went to the Wild Animal Park. My feelings can most accurately be summed up by a journal I found at a convenience store in Zhongshan a month or so ago.

It was actually really cool. We went in a safari bus where we passed zebras, wolves, a bear that literally climbed on our cage and stayed there while we drove, several lions and tigers and cheetahs that we (the tour guide) threw some raw meat at, and sun bears and other awesome animals. 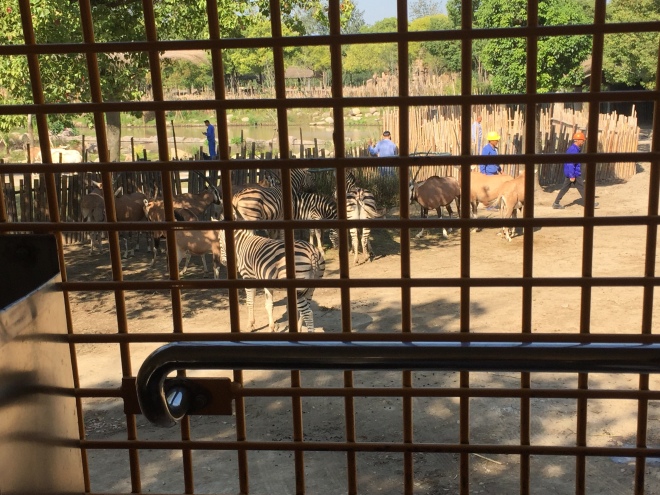 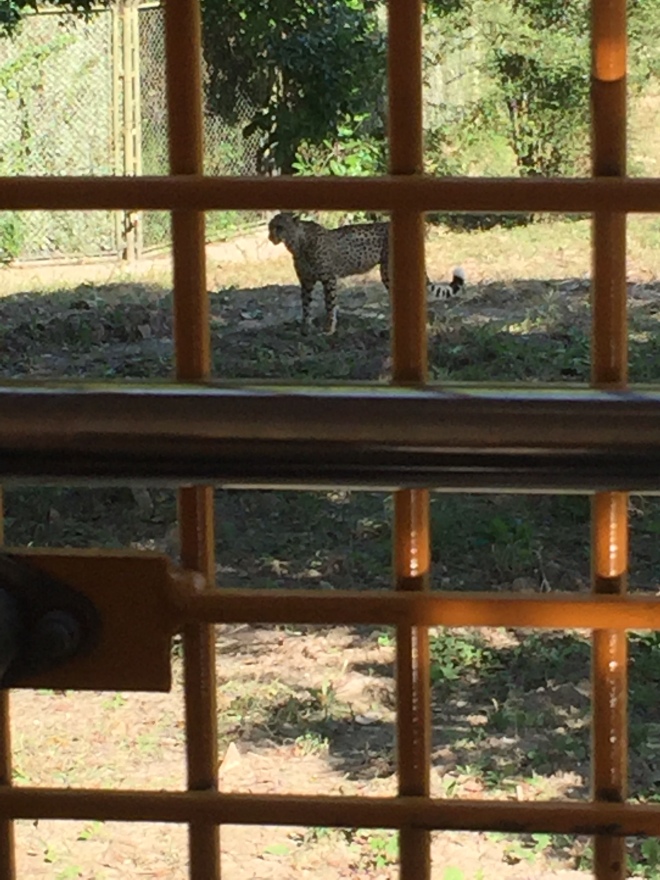 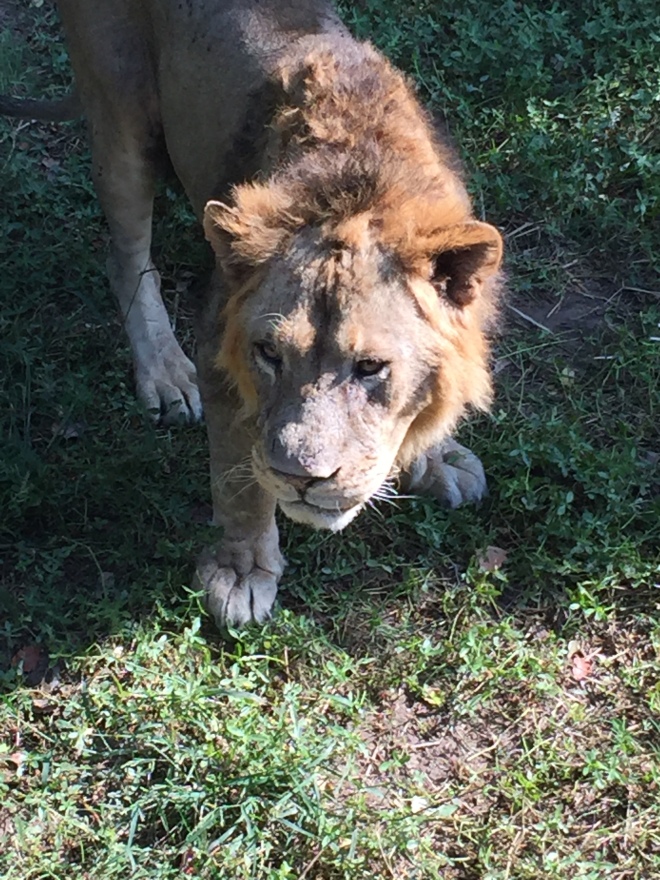 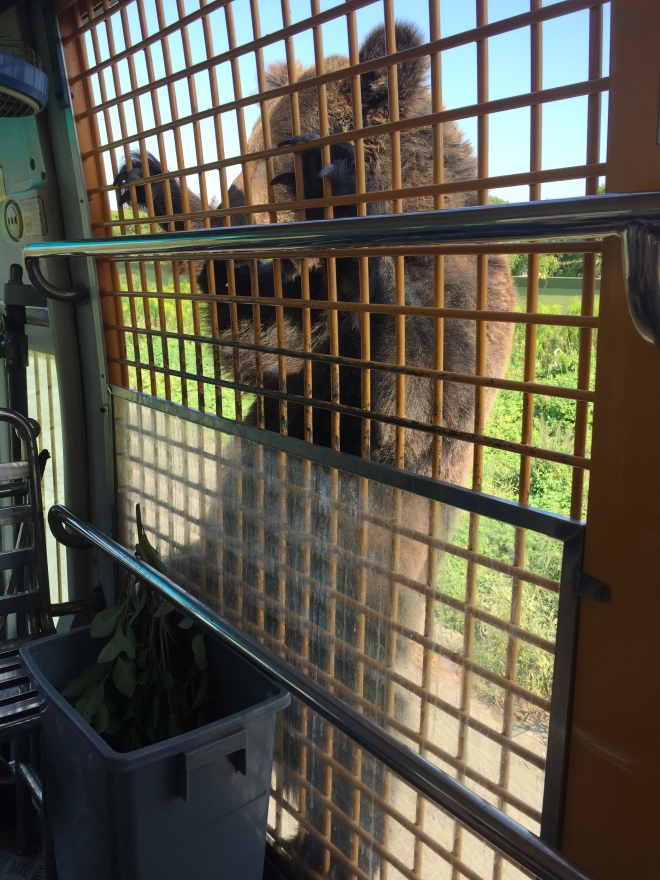 There was a kangaroo enclosure where you could go in and feed them and pet them for about $3. I didn’t do it because I’m an idiot who didn’t think it was that cool at the time, but now as I write this, I realize that would have been very cool. Especially because there were some little joeys in the pouches of their mommies.

On the other side, there was a llama enclosure, where Tina the fat lard was finally eating her dinner. (Ok they’re alpacas but full disclosure, idk the difference.)

I fed an elephant in my elephant pants and I got to stroke his trunk and look into it’s majestic eyes and put vegetable chucks in his trunk, so it was a mad success.

They rode the elephants, the camels, and fed the zebras, but my hour was yet to come. I didn’t get to hold a baby tiger, but I PET A BABY CHEETAH. I kissed him, too. I definitely should have picked him up. I mean, it was against the rules, but what were they gonna do, ask me to leave? They would’ve done that anyway. Except it’s probably good I didn’t do that because kitties have sharp claws and who knows what cheetah kitties claws are. 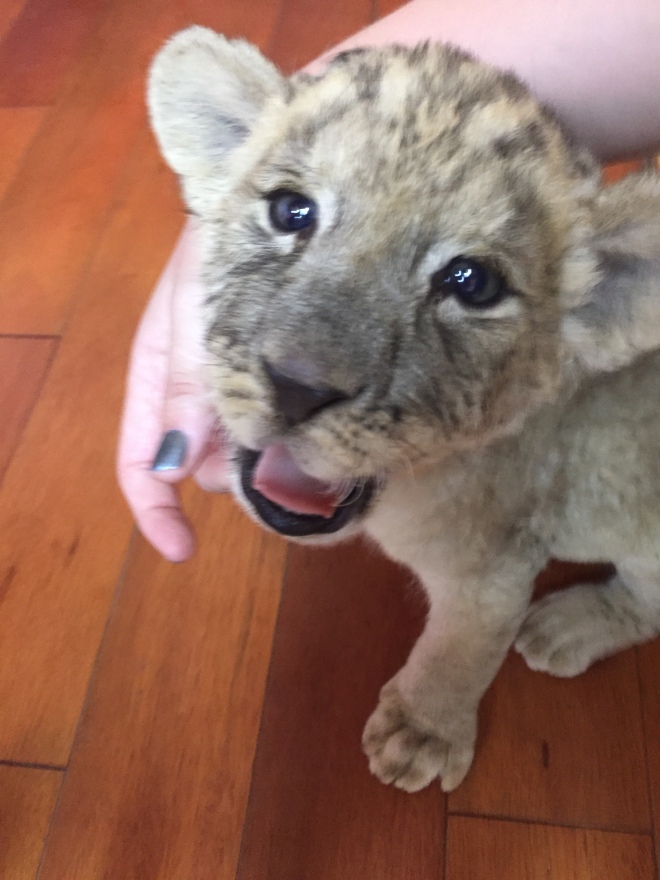 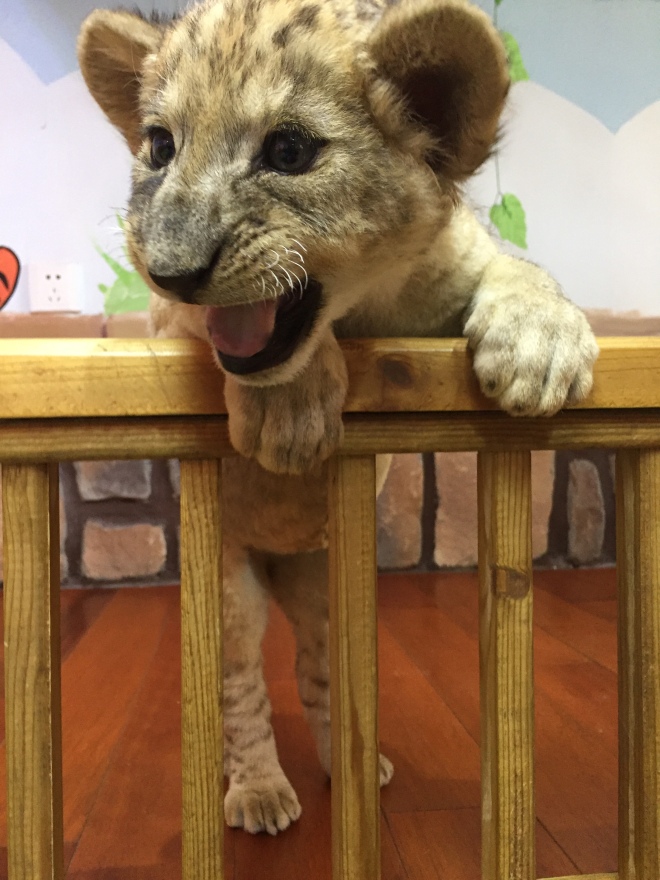 Look at him, workin on that roar. Oh my GOSH I want one so bad. There was also a baby sunbear. He sucked on my finger. Pretty cute.

Then we saw the Pandas, the hippos, the other animals. It got more like a zoo after that but uh… I will never forget that cheetah.

We got back to the hostel and I became really lame. The nightlife in Shanghai was probably poppin, but I didn’t live to see it because sleep is my one true joy. After baby cheetahs.

So No One Told You Life Was Gonna Be This Way…

Sunday was one of the chilliest days ever–we went to the Friends café, Central Perk. Because why wouldn’t it be in China.

It was also fitting because my life is a joke, I am broke, my love life is D.O.A., and it hasn’t been my day, my week, my month, or even my year. So that’s it, who’s going to be there for me? This hot chocolate, I guess.

Spoiler Alert: it was not very good. But it was such a cool joint! There was the orange couch, the wifi password was iloverachel, and there was a TV playing through the episodes of Friends. I could have stayed there all day. Also, their menu was so perfect. And the burgers came topped with a toothpick and piece of paper that said “Joey doesn’t share food” which is kind of my life motto. 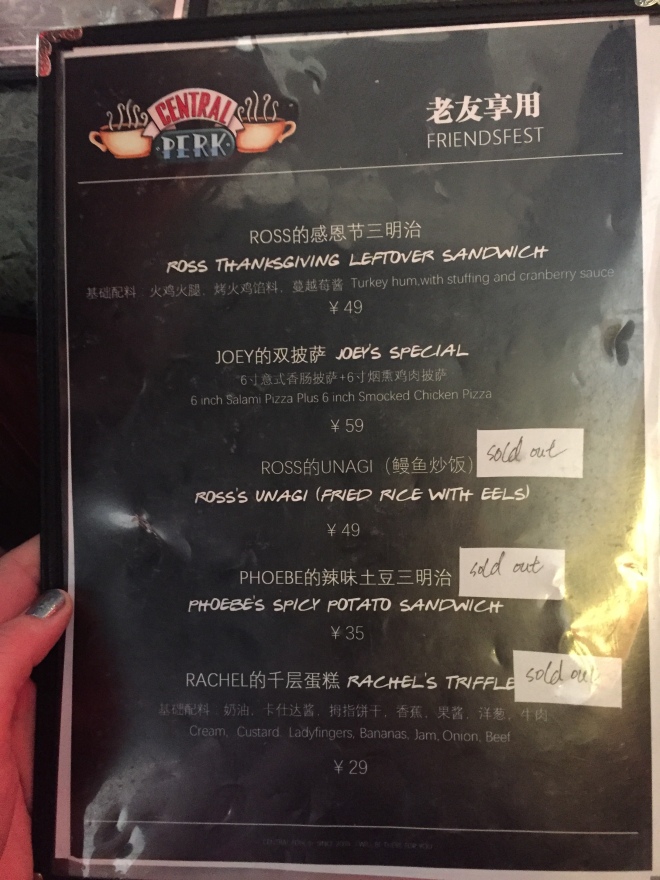 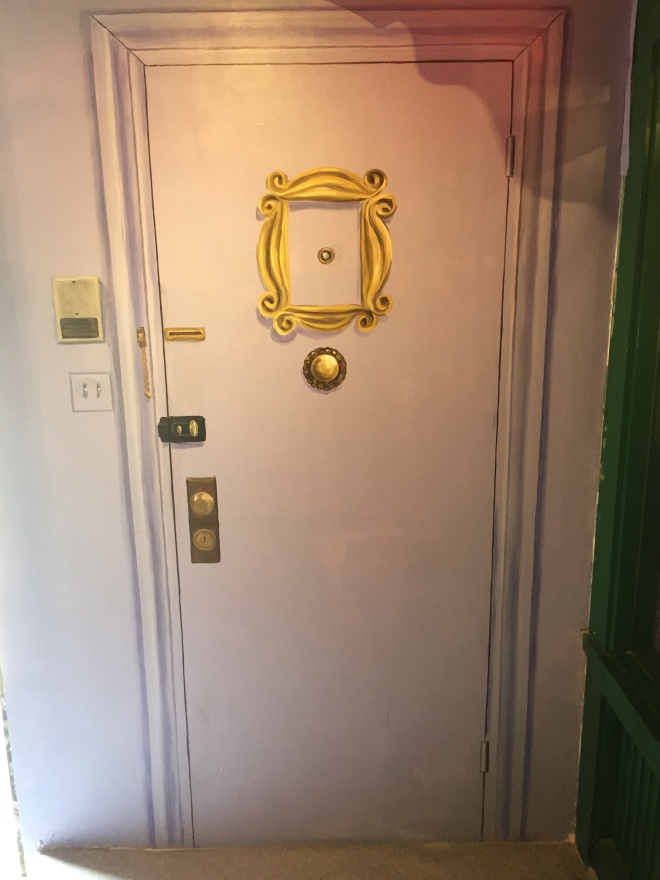 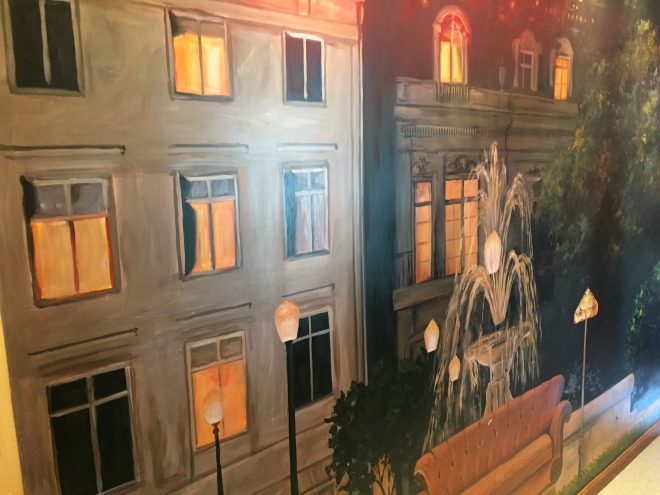 Our last train ride was an all night sitting train ride. I had an aisle which was awesome despite the fact that the lady next to me had to get out to pee 17 times. Rach and I actually set out to find the train car that was the restaurant and they had really disappointing food. But we met a dude named Peter who spoke great English and bought us some really expensive bottled water in exchange for out “English tips” (which we didn’t really give that well) but he was way nice. He actually reads the same books I read in my Senior English capstone class, so I’m impressed.

And then we went to school, back to the kids, and spent a week without talking to each other because we got too much of each other on vacation.