So I’ve written songs for a while now (like 15 years?) and last year, after I graduated college (you know, the “responsible” big-kid thing), I thought I’d explore more of the songwriting world. I don’t know how I found Judy Stakee, but she’s a sort of songwriting mentor and I started following her on Facebook. She does about 6 songwriting retreats a year where she takes some songwriters and teaches them her methodology and about the business and has them co-write and offers song critiques and the whole she-bang.

So before I left for China last year, I was a Broke Kid and couldn’t afford it. But then, in February, while I was an even more Broke Kid who couldn’t afford it, I saw the ads again and thought it would be cool. However, there was an application process, and I didn’t think I had much of a chance. But does that mean I don’t try at all? No! It just means I don’t try very hard. So I’m in bed at like 11pm watching something on Netflix and filling out this application, attaching poorly recorded SoundCloud songs, only half believing in myself.

But guess who got accepted (!!!) and then opened a credit card to help cover the cost? This Broke Kid! (so yeah, I’m still trying to pay that off, if anyone wants to find me job… that would be real helpful.)

The decision to attend wasn’t an easy one, as I didn’t have the funds or the slightest idea of what to expect. I also had a massive episode of self doubt when I found that my resume and accomplishments as a songwriter were, like, zero compared to many of the other people going. But my commitment to doing something new every week this year (and making at least some of those things cool) was strong. And it pushed me to do this.

And I thought that going to a songwriting retreat would be my new thing, but I actually did so many new things because of it.

New Thing Number One: Be in NASHVILLE 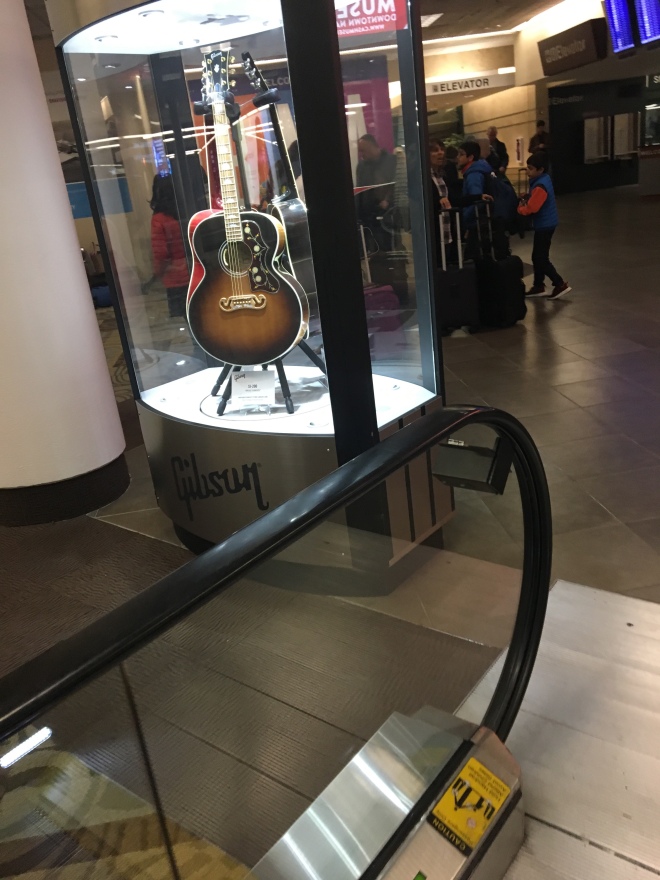 I flew in on Saturday night, so that counts as my new thing for week 11. But I’d never been there! And i was immediately smitten.

Yep, that was new. At least the band sang Maren Morris’s “My Church”?

One of the girls also attending the retreat (Molly Adele Brown, look her up on the streaming sites and/or instagram) was SO kind and offered to let me stay the night at her apartment (because it was cheaper to fly in the night before than morning of) and she plays with a band every Sunday morning at this bar on Broadway, so I got to check that out. It was St. Patrick’s Day and so… yeah, you guessed it, random dudes in leprechaun geddup all up on the dance floor. 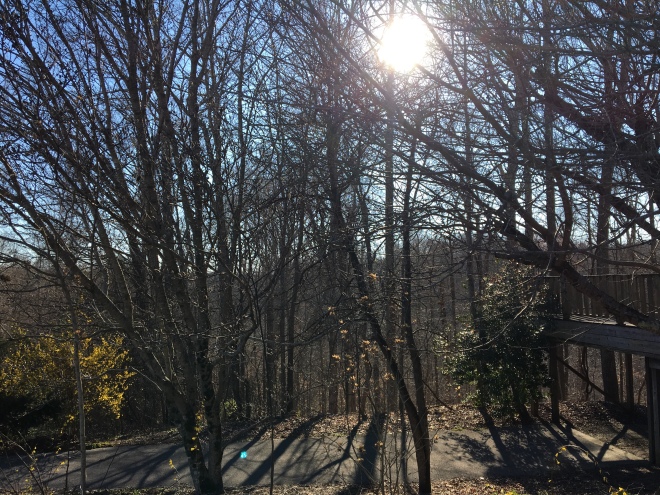 [This is just a photo of the beautiful property because I was a little too preoccupied to selfie while upside down.]

So Judy has this three-part methodology and the first is that you take care of your body to take care of your voice. Sounds reasonable, right? So we did yoga first thing every morning. And I know you’ll hear from every single person that no matter what business you’re in, to be healthy and successful, you gotta wake up early and get stuff done. But just once I would like to be told that the secret to a successful life is having a really wack sleep schedule that doesn’t involve waking up early, because that would really offer me some hope.

Anyway, Judy invited everyone to do a handstand because apparently it helps with confidence or somethin wild. So I, having this philosophy of trying new things, decided to jump on that (don’t worry, there were two spotters). At first, I was feeling a little like I would pass on the invite because I do not have the “I do yoga and handstands” body type ifyouknowwhatimsayin, but like… you miss out on so much of life if you limit yourself because of your body insecurities. So I went to the front of the room and, of course, it’s always comforting to hear your second spotter ask for a third spotter… but then I went up into a handstand and it was actually really cool. And everyone was really shocked for some reason, probably because they didn’t expect a fat girl to be able to hold herself upside-down. And don’t get me wrong… it definitely hurt my wrists, but… I’m kinda strong and stuff.

So moral of the story: Accept the third spotter. Defy expectations. Shake out your wrists. 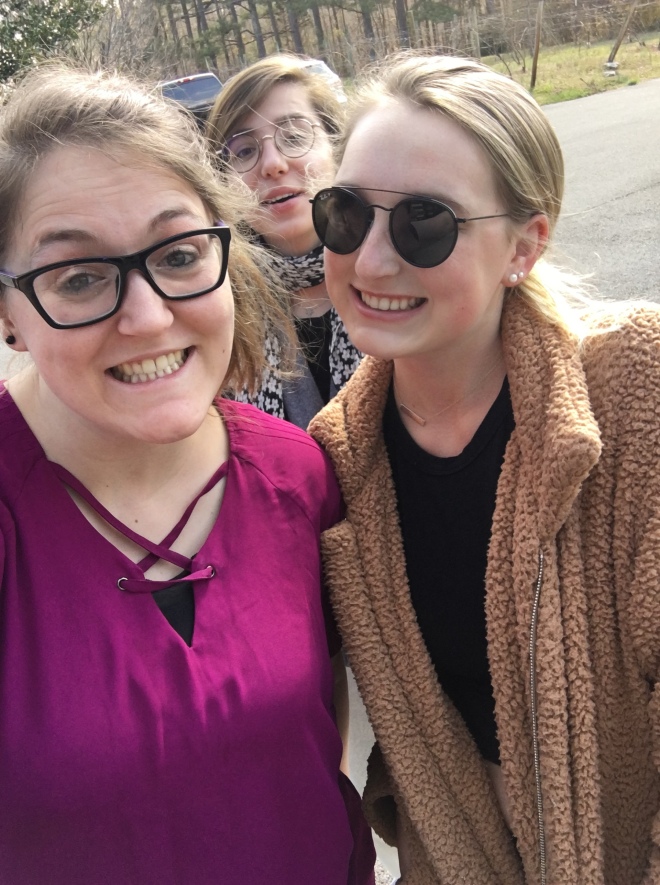 I have written nearly 100 songs and none of them were ever written with another person. And then bam, three days in a row, three different co-writes. And it was a completely new experience, especially considering that my process and most other people’s processes are not the same at all.

The first day, everybody had to write down a sentence that could be the opening line of a song (so basically, any sentence). Then, we put them all in a hat, each person chose a line, and in groups of three, we determined which one we wanted to use to make our song. I could not come up with anything, and everybody had put their lines in, and my phone vibrated, so I wrote down “my phone just buzzed again, but it was probably just an email.” And the group that pulled my line chose it! And they did a great job, A+. Also, I was right, when I checked my phone again it was an email.

The line we chose was “I heard the rumble of the car come around the corner,” and we literally used half of our three hours to write discussing all of the possible songs we could write based on that line. We ended up writing about meeting a love interest from the internet in person for the first time. So that was actually my first time not writing according to my own experience. It was a hoot, though, I’d never come up with that kind of melody, but I like the way it turned out.

The second day, we had to write about what we liked most about ourselves, and then we got into groups and wrote a song about that. Our group’s song actually ended up turning into a song about vision boards, but honestly… it was beautiful. One of the girls in the group played the piano so well and the other girl just came up with this incredible melody on the spot, and within the first 5 minutes, we had this insanely gorgeous lyric-less song. Then we wrote the lyrics, and I have never written to melody before (I always do lyrics first OR them both at the same time), so that was hard. And I, again, wasn’t writing according to my own experience, so that was hard. So really, all I had to offer was a harmony. And the song was probably just as good without my harmony. But I’m still proud.

The third day, we had to write for film. And we had a ukulele player, a guitarist, an amazing vocalist, and me. So they, again, figured out the music and melody, while I worked out a harmony as my only offering. I mean, both of these times, I contributed to lyrics, but writing to melody and not according to my experience is very challenging for me, and I didn’t do much. But the song we wrote turned out so beautifully that I’ve been working on doing my own GarageBand arrangement of it for the past few days. It’s been great but it’s like staring at art until you hate it.

And I think that’s about it for my big time first times. I also had Nashville hot chicken for the first (and second) time. I did writer’s rounds for the first time. And I met Judy Stakee! Wonderful woman, wonderful retreat, all around a good time. Big success, worth the hundreds of dollars of debt, and now I’m confident to be a lot more obnoxious about the fact that I write songs. 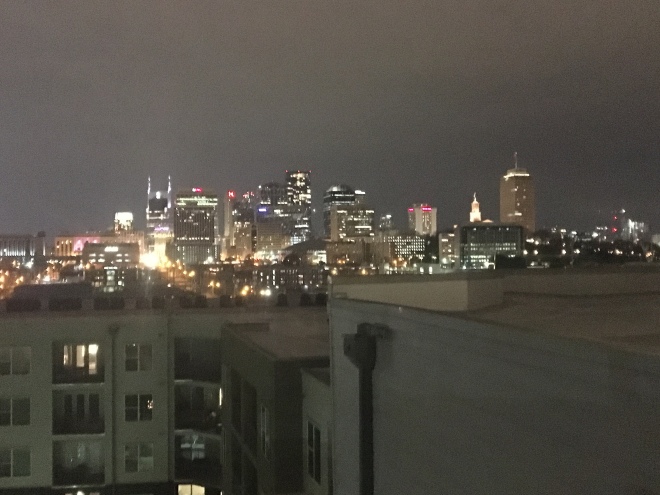